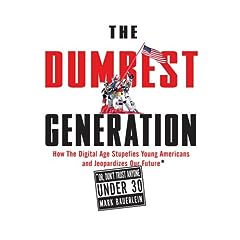 Generation Y, Generation DotNet, and the Millenials are terms used to describe the post Gen X demographic. These “digital natives” have grown up with technologies like the Internet at their fingertips. They have lived in a society that has pampered them since their diapers days. Yet with all the technology, attention, and money spent on them, they are proving to be the Dumbest Generation, according to author Mark Bauerlein.

Bauerlein’s The Dumbest Generation – How the Digital Age Stupefies Young Americans and Jeopardizes Our Future* (*Or, Don’t Trust Anyone Under 30) details a daunting truth about the unintellectual youth of America:

…in sum, while the world world has provided [teens and young adults] extraordinary chances to gain knowledge and improve their reading/writing skills, not to mention offering financial incentives to do so, young Americans today are no more learned or skillful than their predecessors, no more knowledgeable, fluent, up-to-date, or inquisitive, except in the materials of youth culture.

While savvy technology consumers, DotNets mainly view the Internet and digital technology as a playground or a “social joy” as Bauerlein describes it. I have written in the past that for the DotNets, “their cognizance of the Internet has always been directly related to its social implications.” So, although they have the most amazing opportunity to explore what seems like an infinite amount of subjects with the click of a button, Bauerlein writes that they actively cocoon themselves in the superficial realities of youth culture via IM, text messages, social networks, and other similar technology.

A theme of Bauerlein’s book is the me-centric world that Gen Yers create and in which they exist.  The you, me, and I trend is a well documented Digital Age  phenomenon. We have YouTube, MySpace, and the iPod. Time magazine even told us that – YOU – were the Person of the Year in 2006. Hopefully, someone was fired for that.

It is tempting to blame the narcissism of Gen Y solely on digital technology. Others like Dr. Jean Twenge, author of Generation Me, note that, what she calls “GenMe,” is the first to develop in a you can do anything, follow your dreams, be happy society focused on the individual’s needs and desires. It is therefore arguable that digital technology is not the underlying reason for DotNet’s self-consumed existence but a rather serious enabler of a societal approved attitude.

The recipe for the Dumbest Generation then, seems to be the mixture of a mindset (e.g., “you can be anything you want to be”) and a facilitator (e.g., “YouTube – Broadcast Yourself.”). Neither are completely to blame. Society did not only teach the “you” mentality to DotNets. For at least the oldest Gen Yers, there was Reading Rainbow, Mister Rogers, and a host of other cultural influences that fostered a love for learning. Similarly, Facebook and other sites like it are just pockets, although popular ones, of the vast World Wide Web.

Unfortunately, the interplay of these two forces have been utterly detrimental. Bauerlein writes about Gen Yers apathy towards reading (both on and offline), their lack of basic knowledge (e.g., Jaywalking), and more generally, their disinterest in the world outside of their digital realities.

One could criticize Bauerlein for not providing enough solutions in his book. His suggestions to combat the dumbification of America’s youth seem to be an afterthought to the siren he sounds. But there are solutions – and there doesn’t need to be. Bauerlein’s warnings and fact based analysis are significant in and of themselves, hopefully rallying parents, teachers, policymakers, and many others to fight for the future of America. After all, as he writes, “[i]t takes a home, and a schoolhouse, and a village, and a market to make a great public intellectual…”

Note: This post is not meant to be a review of Bauerlein’s book. There is far too much research, important ideas, and poignancy to capture it all here.