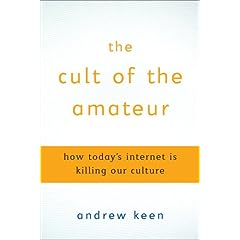 Many people suffer from information overload today — especially on the web. There’s a growing number of content and service destinations on the Internet that are competing for the consumer’s attention. What is worthwhile? Keen believes that due to the democratized nature of the web, picking out the “signal from the noise,” when accomplished at all, is done so in an inferior way — a digital mob. With the absence of the expert, Keen sees the rule of a digital tyranny of the masses that not only is not credible but also produces a “flat noise of opinion.”

The Internet and Web 2.0 only makes it easier to do some of these things. Although I disagree with his ultimate conclusion of how to fix things (i.e., to put trust in experts again — I agree with it in part), I too see the questions about the web as “ideological rather than technological.”