If you have ever visited a museum, the first thing you’d likely look for is a map. The map provides you with a guide for where to find objects of a similar theme. If you went to the National Museum of American Museum of Natural History in New York City, you would notice that parts of the museum are divided by continents; you’d be able to check out North American Mammals or South American Peoples. 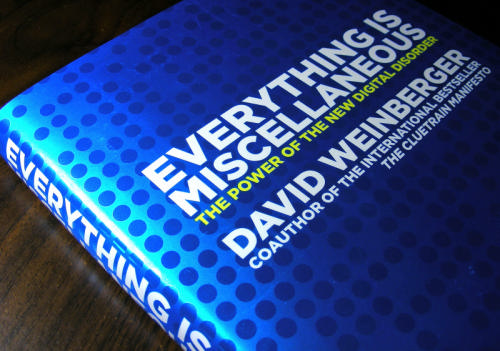 With the advent of digital technology, however, Weinberger describes a third order, which paradoxically, ushers in no order at all. The third order represents a shift from atoms to bits, from the physical to the virtual and according to Weinberger, from order to the miscellaneous.

Throughout his book, Weinberger weaves what often appears to be a miscellaneous web of arguments to challenge what he sees as the presumptuous nature of order. He looks at everything from the structure of the Dewey Decimal System to how celestial bodies are (or are not) classified as planets to question established notions of order. He makes a bold conclusion: the third order not only changes how the world is organized, it challenges the authority of those who do the organizing.

Weinberger’s world praises the individual’s view of “order” over that of experts. He believes the advantage of the “digital opportunity” is to destroy “the idea that there’s a best way of organizing the world.”

Whether looking at atoms or bits, the concept of the miscellaneous holds some value. After all, not everyone organizes his linen closets the same way. Given a hundred sock draws, you’d probably find a significant number of different combinations.

For example, how does the third order apply to the physical Museum of Natural History? Even a virtual museum would need some sort or first order of order. Before an object could appear in the virtual museum, it would need to be qualified. A curator, someone trained and knowledgeable in a particular element of natural history, would be required to inform the process of choosing what should be included in the virtual tour of the museum. That’s the first order of order at work; putting objects in places. Yielding to miscellany, to individuals or groups of individuals, could create a natural history museum filled with everything from Walt Disney DVDs to empty plastic bottles of water.

In a truly miscellaneous world, there would be little to no common experience to understand existence. First and second orders are responsible for everything from language and currency to menus and encyclopedias. Are they perfect? No. But they do establish a basis to communicate and even to disagree. And that is something that’s difficult to do with Weinberger’s ideas about everything being miscellaneous.